Registered Nurse Salary at a Glance
The registered nurse (RN) is one of the most diverse nursing occupations, with wide ranging skills and qualifications. RNs are used in various health care environments. They provide direct patient care, deliver health-related education, and offer advice to patients and families. “To do what nobody else will do, a way that nobody else can do, in spite of all we go through; is to be a nurse,” said Rawsi Williams. It’s for this type of dedication that nurses are compensated, and rightly so.

Becoming a Registered Nurse
In the United States RNs are required to be licensed. To become licensed, nurses must graduate from an approved program and pass the National Council Licensure Examination for Registered Nurse (NCLEX-RN). There are three common types of RN programs that nurses take: a bachelor’s of science degree in nursing (BSN), an associate’s degree in nursing (ASN) or a diploma from an approved nursing program. Any of these three paths can qualify a nurse for an entry-level staff nurse position, but some employers may require a bachelor’s degree.

Industries with Highest Levels of Employment for Registered Nurses 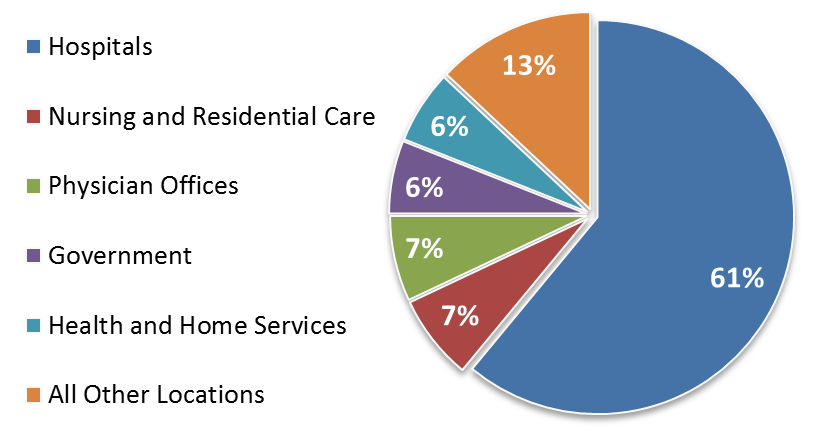 In 2012 there were approximately 2.7 million RNs employed in the United States. Most RNs work in private, public, and state hospitals, followed by physician offices and nursing and residential care facilities. RNs are found in many other work settings, including correctional facilities, schools, community centers, and the military.

Median RN Salary
On average, RNs earn 25% more than the median salary of all workers. In 2012 the U.S. Bureau of Labor Statistics (BLS) identified the median RN salary at $67,390 per year, or about $33 per hour. While the lowest 10% of RNs earned about $45k per year, the top 10% of RNs earned more than $94k annually on average. Of course there are different areas across the country where RNs have a much higher earning potential. 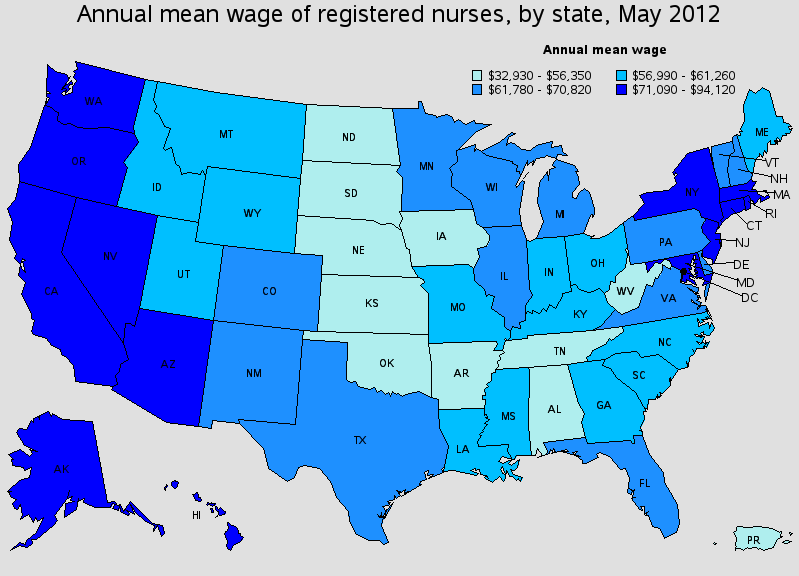 Some people argue that California continuously tops the list for highest salary because the cost of living is much higher there. Just like any state, California has pockets of higher than average income levels. But when you compare RN salary with median salary from the same state, you realize something: California simply pays nurses better. California has the highest margin of difference between RN salary and the salary of the average worker (64%).

RN Jobs and the Nursing Shortage
The United States is currently facing a nursing and physician shortage. This is due to a combination of expanding affordable health care, lack of nurse educators, and the fact that many current nursing professionals are moving into retirement age. The need for RNs has never been greater. The BLS projects that RN jobs will grow by 19% over the next decade, a rate much faster than usual. BLS estimates are that 526,800 new RN jobs will be created between 2010 and 2020.