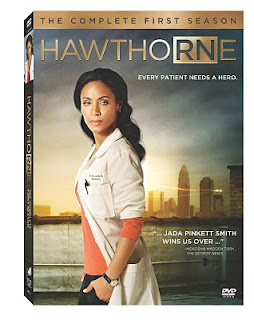 To celebrate the release, Sony Pictures has offered special bundled DVD deals (including the HawthoRNe DVD) to hospitals and nursing websites for their lending library as a promotion.  In the interest of full disclosure, my intention is to donate some of the DVDs to hospice lending library where I work, and to give away some to my readers as well. Stay tuned for details next week.

The HawthoRNe series DVD will also feature special clips such as:
* All In A Day’s Work - A Conversation With Jada Pinkett Smith
* Inside Richmond Trinity
* Get To Know The Cast Of HawthoRNe
* HawthoRNe Medical School
* Male Nurses
* Shooting A Scene - Visual Effects
* HawthoRNe's Heroes

View a clip from the pilot episode.

HawthoRNe will be available in your local DVD retail outlets as of Tuesday, June 15.